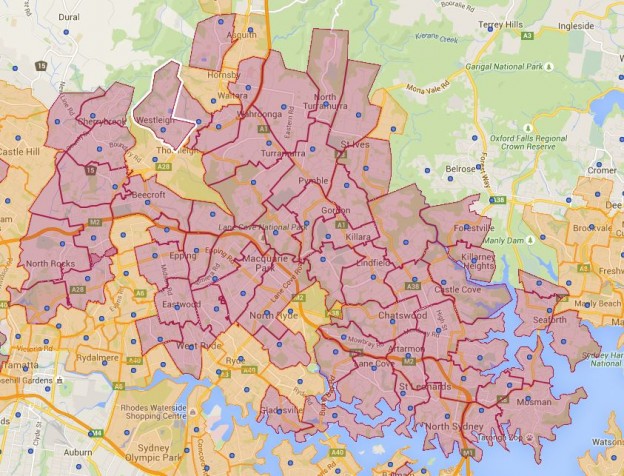 I just finished mapping the top 50 and 100 Sydney, NSW public school which you can find them in the previous two entries at

It is actually very interesting how concentrated the top public schools for NSW are located. 91 out of the 100 top public school are located in Sydney two of which are special schools, 2 in New Castle, 1 in Wollongong, 1 in Central Coast and 5 in country NSW. To give some prospective in pure population wise, 62 percent of NSW population lives in Sydney, however 89 percent of top 100 state’s public schools are in Sydney. The concentration is even higher when you looking at the top 50, 46 out of the top 50 state’s public school is in Sydney for the year 2014. There is another top 50 that is located in Sydney which not included in the count that is the Sydney Distance Education Primary School.

First I want to mention that the breakdown of region is approximate as there is really no exact definition which suburb belong to which Sydney regions.

Number of Public Schools in each respective Sydney area that are in top 50 in NSW. Another interesting point to note when looking the stats is that Western,  South Western Sydney and Shire district are not represented in the list at all.

This is the number of Public Schools in each respective Sydney area that are in top 100 in NSW. South western Sydney is again not represented at all, Western Sydney and Shire district only have marginal presence in the list.

I may do a follow up entry in the future to do some further analysis on why the concentration of good public schools in North Sydney. If I get time I will try also collect some other stats to facilitate this.

As usual contact the school in question for the final confirmation and you can also access the full catchment map by following this link.