I have encountered this landmark study a few days ago as mentioned in my Educational opportunity in Australia 2015. I have start reading the study, the key finding already contained some really interesting information. I had a browse through the study as well to see the data and information available as well. There are a sea of data to demonstrate and back up the findings in the study, also offer some really interesting insights into the Australian education in general.

I will probably try to do this in a 5 to 6 part series, to be honest I think this is still not doing justice to the data and information I had read so far. We will see how we go with it I guess. The study had broken the result into four milestone and they are as following.

There are more detailed information which you can read from the full report, but I am summarizing what I think are the most important and relevant points as following.

Milestone 1: At the point of entry to school. #2

Milestone 4: Engaged in education, training or work at age 24 #5

I am pretty sure I covered all the most important and interesting parts from the key findings. There are already some really interesting finding and study will then goes into detail with massive amount of data. I will attempt to go through each main section and list some of the examples.

Reference: #1 to #5 Educational opportunity in Australia 2015

I was just browsing news and came across this “Educational opportunity in Australia 2015“. I have downloaded the study and reading it now, it is a 100 plus page work, so it will take me some time to fully digest and understand the information inside of it. However just by going over the executive summaries and key finding, it is already shaping up to be a very interesting read.

The results show the proportions succeeding and missing out at each stage (our best estimates, based on available data). They show about six in 10 or more of all children starting school get through early and middle childhood with the kinds of academic and social skills needed for later success. The same proportions complete school and are fully engaged in education or work by their mid-20s. For this large group of young Australians, school works well and they succeed across all stages. They make the most of the opportunities our education and training system provides. #1

We all know education in general is very beneficial and higher social economical background offers an advantage in this as well. What this study did is not only affirming this and applies some solid numbers and stats to it.

But what we learn from the patterns is that young people who are missing out can recover and gain ground. Being behind at any point need not be a life sentence, even for the disadvantaged, though even here the chances of recovery and of gaining ground are still in favour of students from more advantaged backgrounds. The most advantaged learners are not only less likely to fall below expected standards in the first place but more likely to catch up again if they do.#2

The study contained a treasure trove of information and I will keep posting as I am going through it. A quick browse already got me eager to read more of it, need to sleep less and read more :). 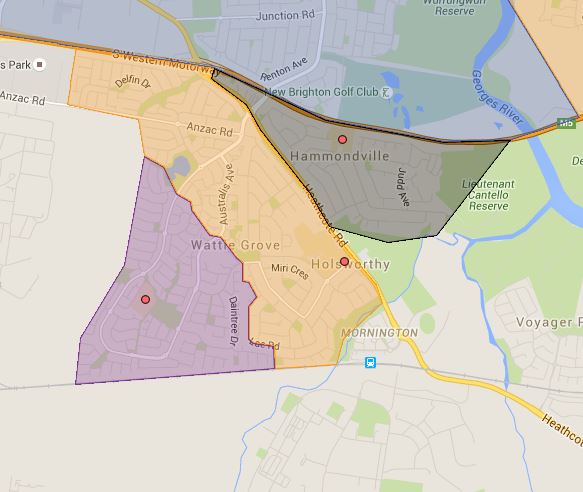 Back to the South West Sydney again and only three public school’s catchment mapped. I will probably try to slowly fill out the center of Sydney and then move slowly towards west and then finally the south west corner.

I recently this article “No advantage to being multi-lingual, Australian study finds” on SMH. This is another interesting one, as Australia and particular Sydney is traditionally immigrant country, just matter of when. There is also a very diverse origin of where the migrants came from. This makes sporting match fun as there is always supporters for whoever is playing and multi-lingual matter of fact for many children.

So this topic is certainly of much interest to many, the basic finding in the article is that being multi-lingual offers no advantage and disadvantage academically. This I agree with myself, provide the person in question is proficient in English, it is certainly case for all my friends. This in my experience generally holds true for kids who come before high school, for the older kids they tend to suffer a little with the humanitarian subjects which is not surprising.

Whilst being multi-lingual offers no advantage academically, it certainly offers a lot of advantages later on in your life. A couple of my friends secured excellent jobs with promising career due to their multi-lingual skills, these are positions they would have never secured without the proficiency in other languages.

For many children of immigrants in Australia, speaking the same language as their parents offers the closeness in relationship sometimes very difficult to achieve otherwise. I also had friends that never mastered the mother tongue that their parents spoke and because the limited English skill the parents command, the home conversation often limited to what I call “kitchen talk”. This is limited to day to day thing, like what you done today, what we having for dinner etc. However discussion of news topic, deeper discussions etc are all next to impossible. 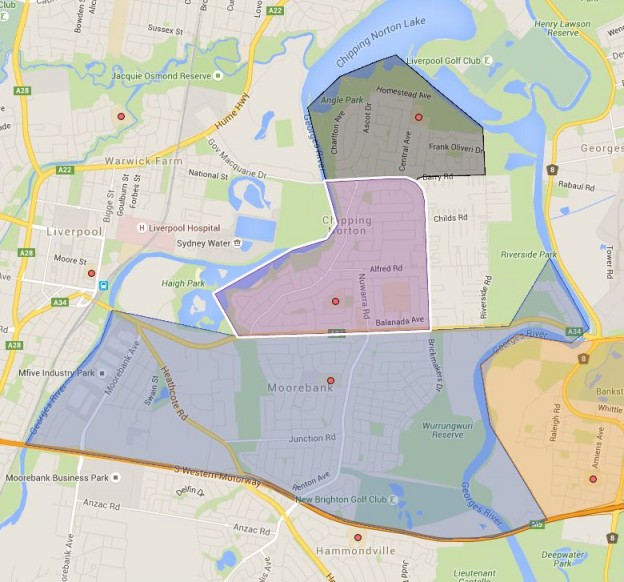 A mini update here, only three public school catchment mapped this time around.

Facing mounting enrolment pressure, a number of new public schools are being opened or expanded in Sydney North Shore area. What this means is once the new expansion and schools open, the existing catchment will change significantly. One prime example of this is Chatswood Public School. The school itself is under extreme enrolment number pressure and current proposal is to shift entire year 3 and 4 to the new demountables to be build on the grounds of Chatswood High School. 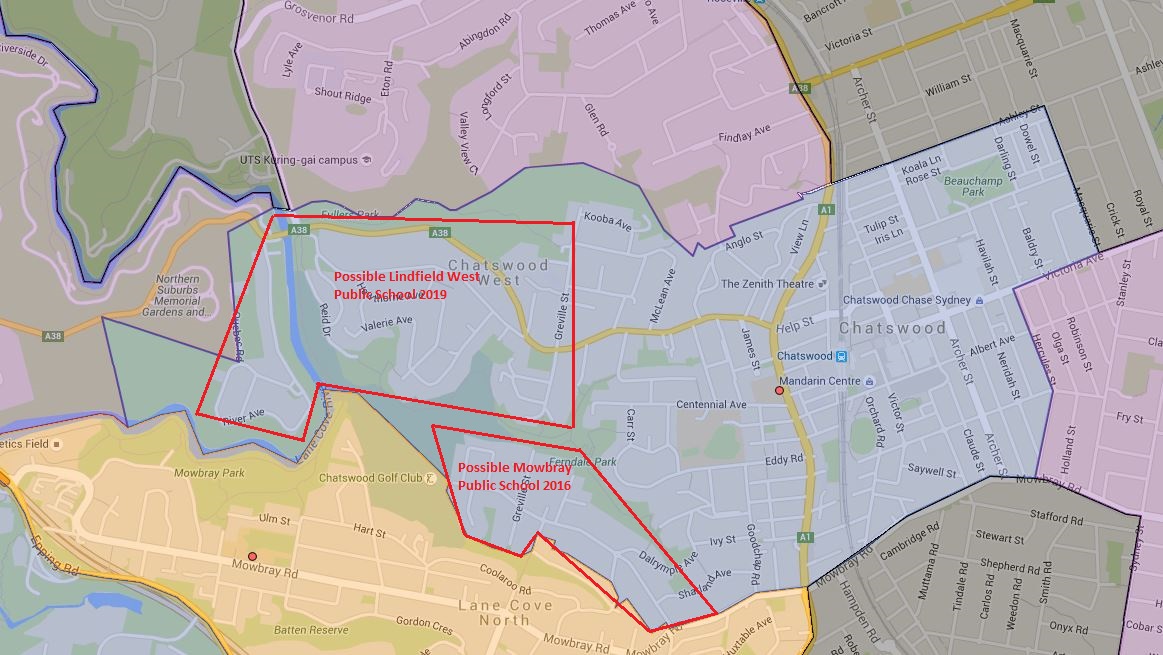 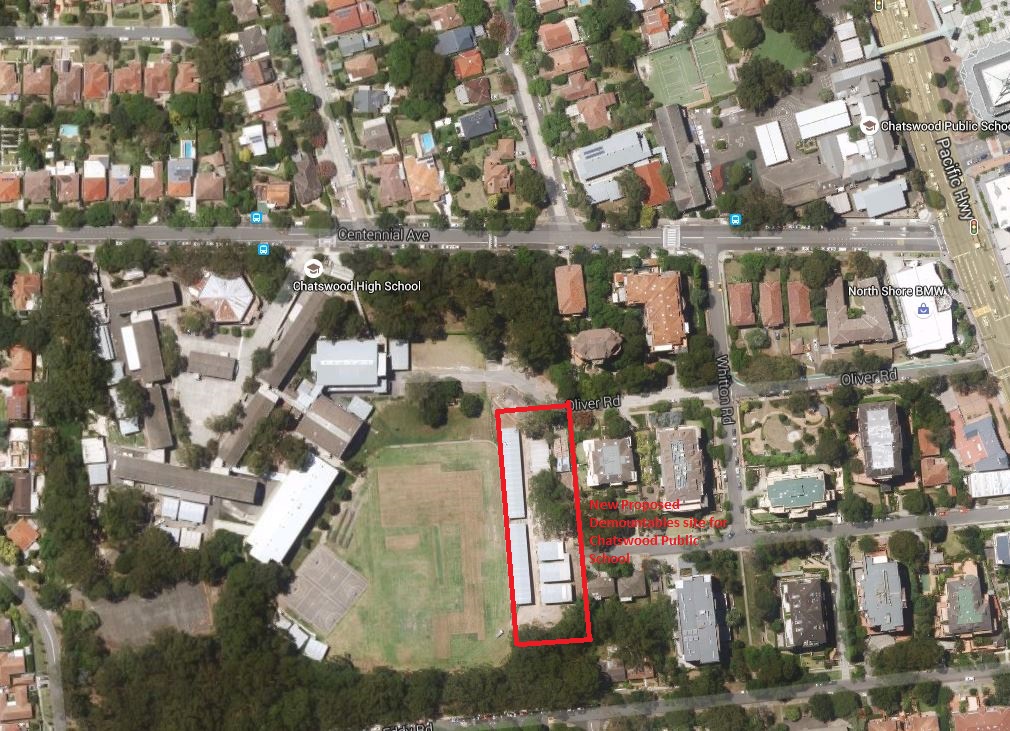 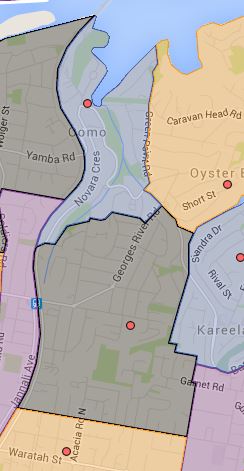 Much thanks to Kate pointing out my error with the Como Public School Catchment in my map. I have now updated the catchment map to reflect this. 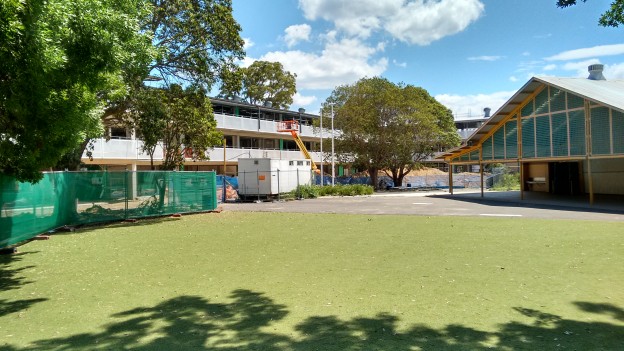 Mowbray Public School is located on the Mowbray Road in the suburb of Lane Cove North. North of the Mowbray road belongs to Willoughby council and south of the road is part of the Lane Cove Council. Lane Cove Council recently rezoned pretty much entire section alone the Mowbray road and apartments just spring up like weeds in my garden after a good summer rain. I drove past this section of the road almost weekly and in the space of a few years, the entire southern side of Mowbray road in Lane Cove West is either built, being built or waiting to be built. This, of course, is one of the reasons that Mowbray Public school is undergoing a major expansion.

In 2014 there were 378 students enrolled and compare to 2008’s number of 267 students, this is an increase of 42% over the space of six years. This might sound high, but actually not uncommon in North Shore area. In 2014, 36 per cent of the students in the school are from none English language background. This number actually is fairly consistent over the years, fluctuating between 35 to 41 per cent. This number may rise in the next few years, with a lot of Asian buying in the area in the recent time, a fair number gets pushed over into Mowbray Public School’s catchment due to sky-high property price in Chatswood.

Mowbray Public School does very well academically and consistently ranked as one of the state’s top public school.

Mowbray Public School Catchment is bounded by Epping road to the south, Pacific High Way to the east, Chatswood golf club, Coolaroo Park to the north and Lane Cove River to the west. A really major expansion for the school is currently underway and proposed to be finished by 2016. The enrolment number is estimated to triple from 360 to 1000. What this means is that it will likely absorb part of the catchment of nearby schools that are currently overcrowded and under stress. Following is the current catchment map, once the new expansion completes, this will probably expand significantly. I will do another post to guess the possible changes in the catchment this will result in. You can search for a particular school or address in the search box in the top right-hand corner of the embedded map or zoom into an area of interest on the map.

The catchment use to be a good mix of multi and single dwellings, however recently following Lane Cove council’s rezoning, apartments are going up in a maddening fashion alone the Mowbray Road. This no doubt contributes to the need to expand the school’s capacity as it will no longer able to deal with the significant increase in population. I drove pass Mowbray Road weekly and it was really interesting to see the progress of the new classrooms close up last weekend. I took a few pictures and it is certainly a massive expansion and definitely the biggest of all the schools I have visited so far. In the following Google Map cut out, I draw out roughly what the new building situates compare to the old set up. The bottom area as marked on the map alone the Mowbray Road is where the new building is going up, essentially all the old classrooms got demolished to make room for it. About 20 new demountables are placed in the northern part of the school as marked on the map. Expect these to be removed once the new classrooms are completed and ready for use. 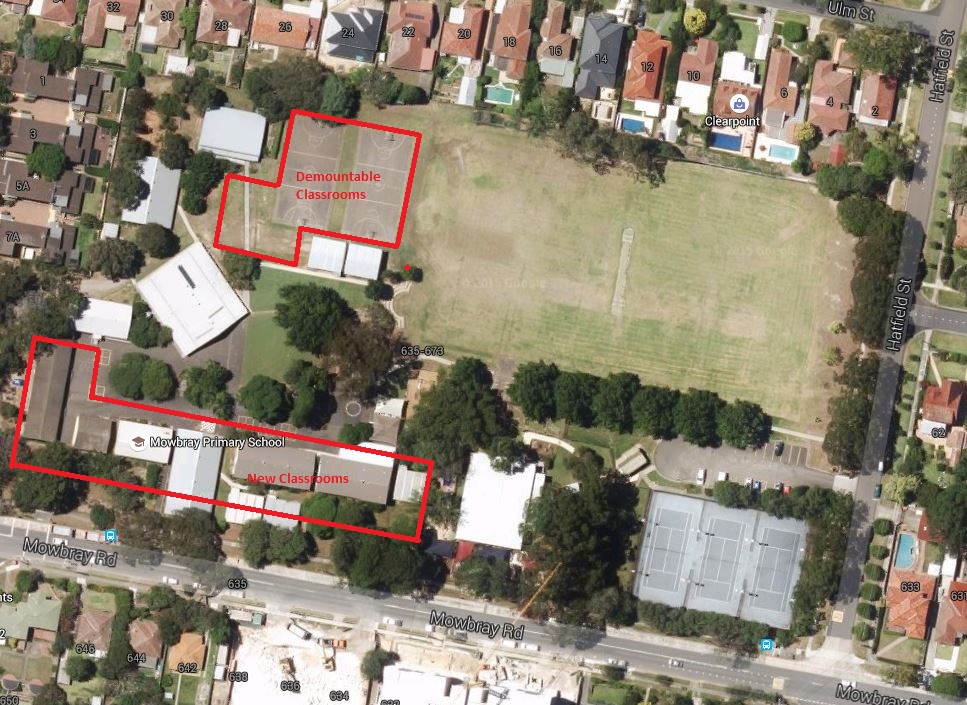 I quite like the new design, it pretty much maintained all the open space and oval. Public school often utilized for a variety of activities outside of school hours and maintaining these open spaces are very important inside and outside of school hours. The new classrooms look great and I am looking forward to its completion and students moving out of demountables. Due to the mounting pressure with the increase in enrolment, it is rare in North Shore area to maintain such lovely amount of open space which will be great for the community in the long run.

Following is the new classrooms that are under construction. 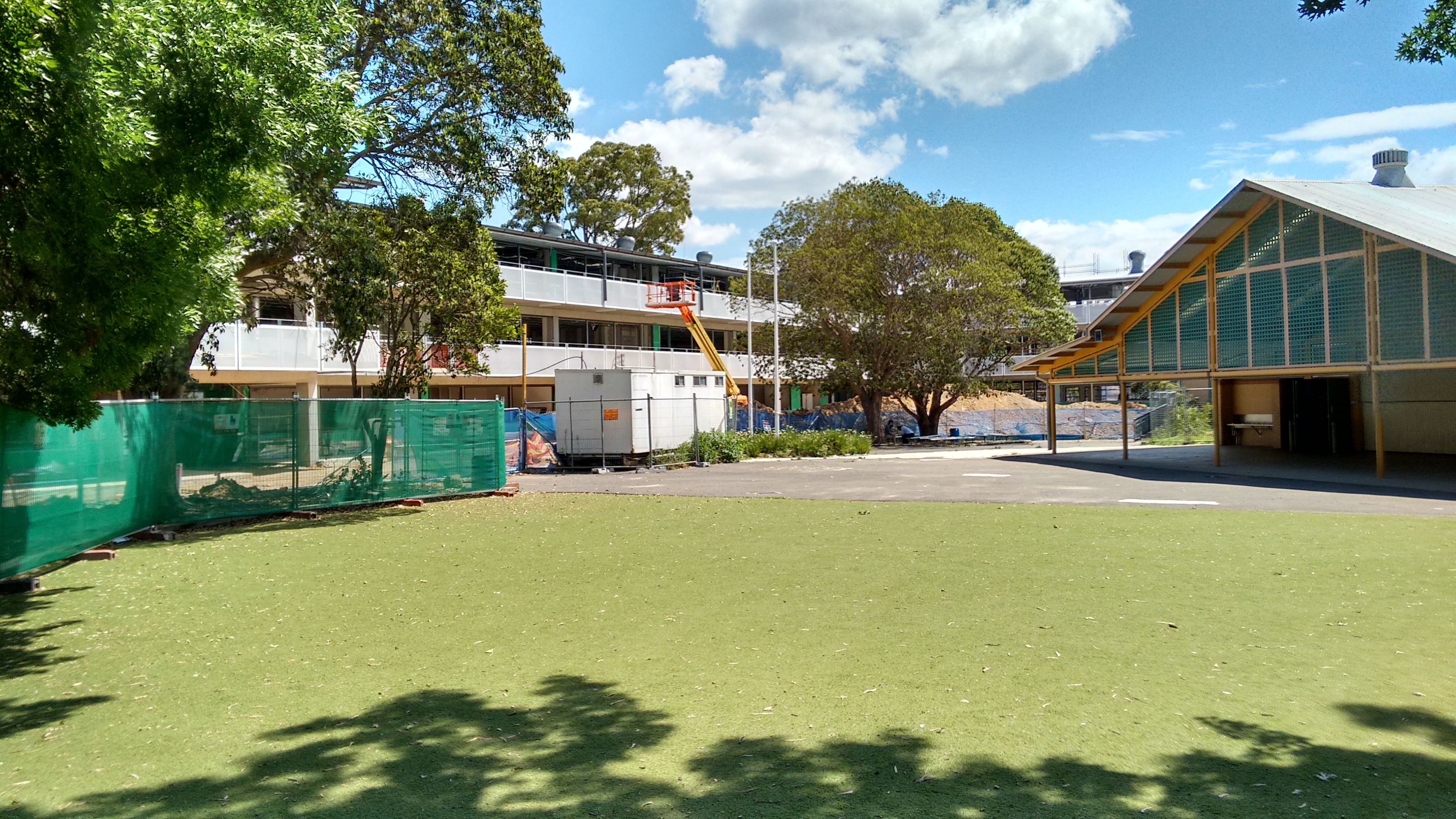 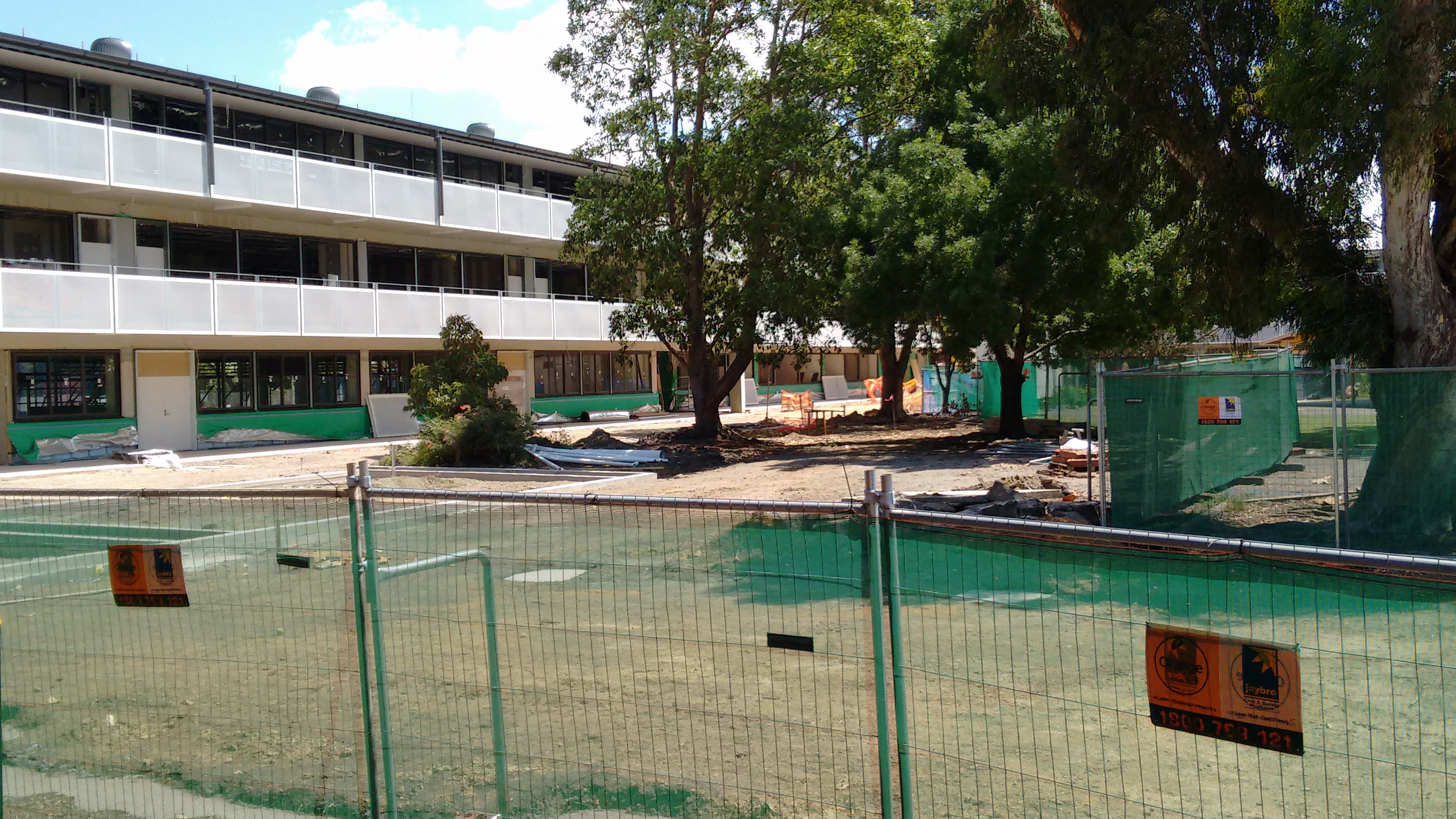 Following is the lovely existing oval view of demountables are currently up to replace the existing classrooms while the new classrooms are under construction. 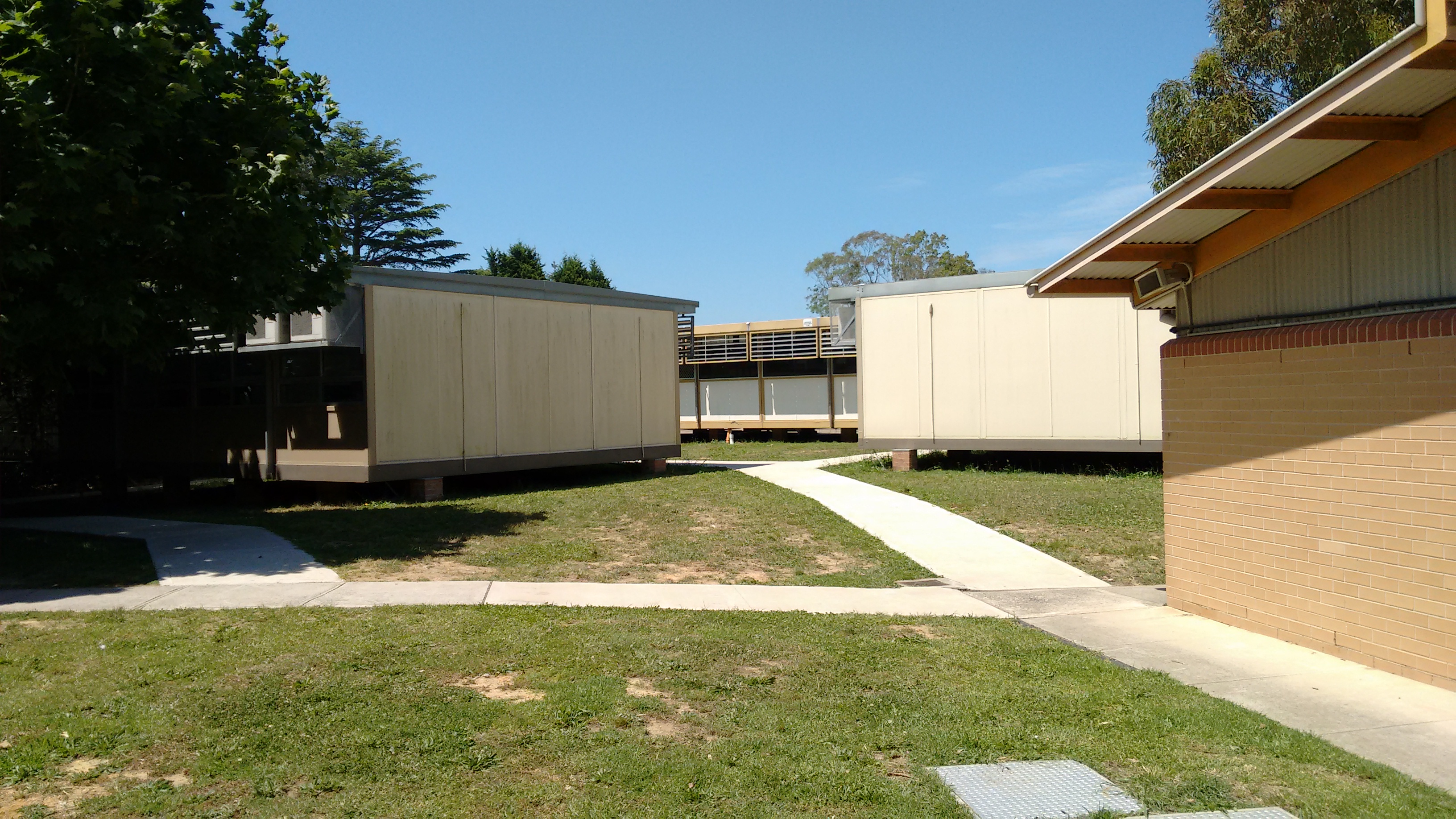 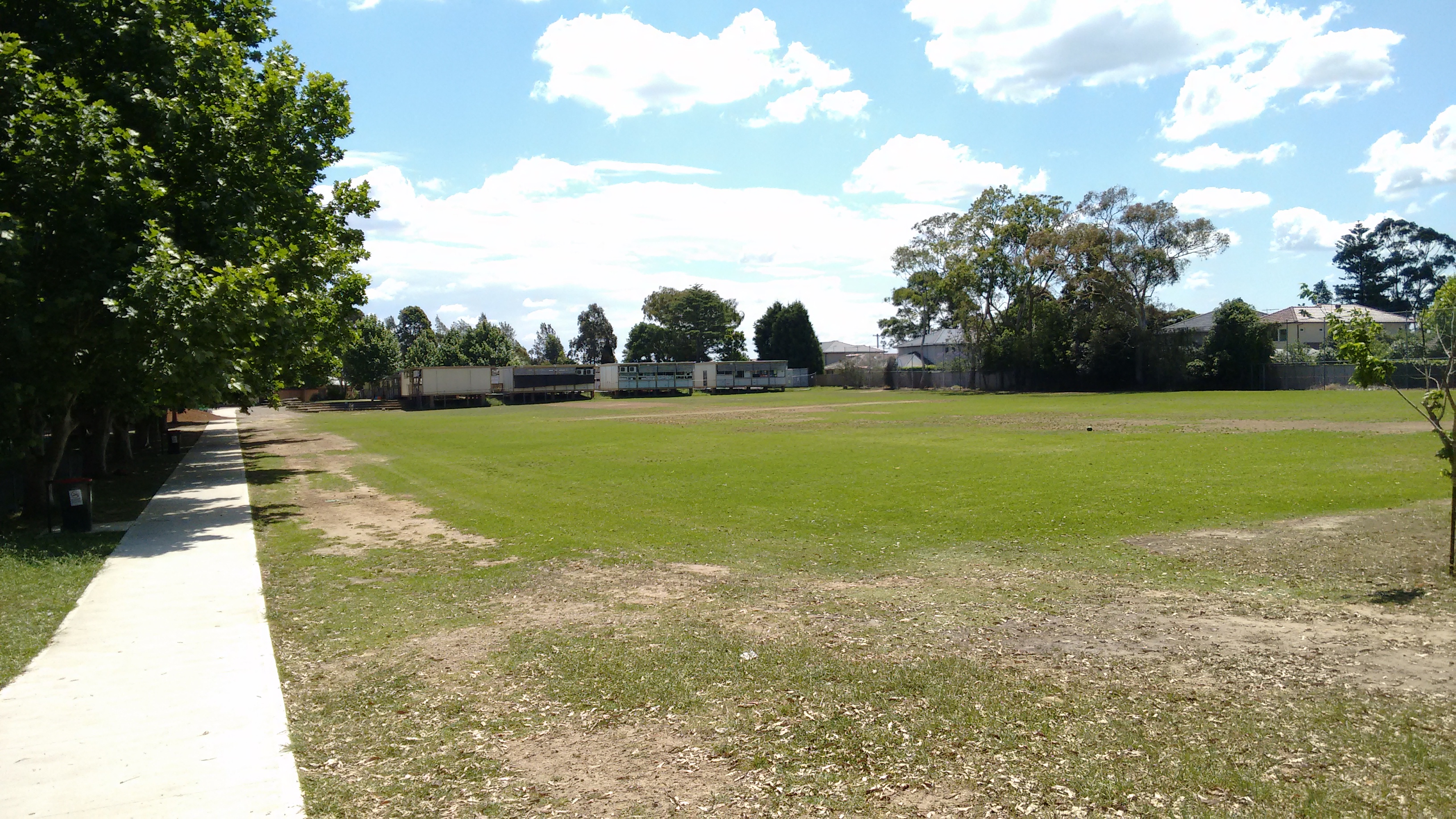 Back to the bread and butter of what I do, four more school added for the Western Sydney. I have not decided which direction to go after this batch, whether keep heading west and or going to try to fill out the south west instead. With the this batch, I am not super happy about the catchment for Marayong Public School, part of it may very well belong to the Black North Public School instead, so I will revisit this again in the future.