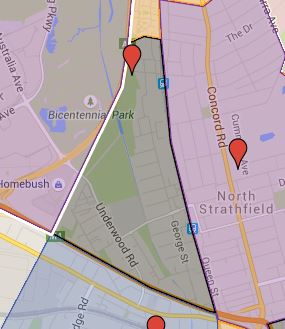 One of the user pointed out that I am missing this particular school, I looked up it had just opened in 2015. Unfortunately I could not figure out the exact changes to the Concord West Public School’s catchment. Concord West Public School had to be under extreme pressure with all the apartment buildings going up in the area. So it stands to reason when a new school was created specifically to relieve its pressure there would be significantly catchment changes. I found reference on its enrolment policy saying so; unfortunately I was not able to locate the catchment map it mentioned.

The net result is that the current catchment map of Victoria Avenue Public School is likely to be fairly inaccurate especially on the side of Concord West Public School.

You can access the full map by following the link.