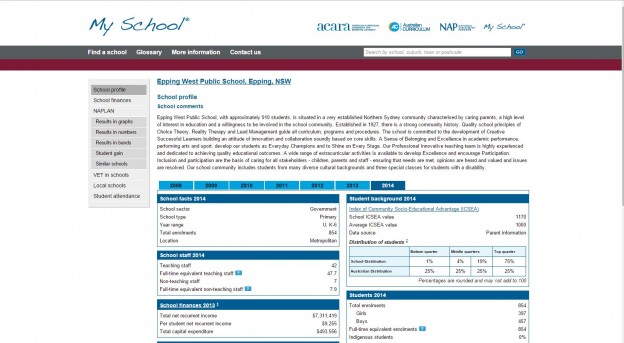 First it is no surprise that schools with higher Socio-Educational advantage do significantly better than average. However even with schools that got similar ICSEA (Social-Educational Advantage Score), some schools do better than others.

As you can see it does significantly better than the Australia average and about on par with similar schools.

Then you look at Epping West Public School, its 2014 NAPLAN result as following taken from Myschool website.

As you can see Epping West Public School has significant higher score for all categories across the board even when compare to similar schools. Also I purposely picked these two school because none of them play host to OC classes which pollutes the result for year 5 and makes it impossible to do a straight comparison. This will artificially make some public schools rank higher than the others because they have a concentration of more talented students in the OC classes. List of public schools that will hosts the OC classes in 2016 can be find 这里.

Using the raw scores between school it is possible to compare schools directly with academically. It is difficult and very hard to measure other aspect of different schools. However ranking them will be hard as there are different categories through different years, how do you weight and compare the these?

When selecting schools, if test score if the main thing you value, then what Myschool website will provide everything you need as long as you understand how to interpret the data available. I will not go into too much detail on the topic of choosing a school for your child as they have been already covered in detail with the following articles

And finally if you ask me what is the different between these two school that with similar ICSEA score have such a difference, I think Epping West Public School just got more tiger mothers.